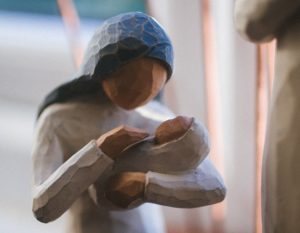 Yesterday was Mother’s Day in the UK and it got me thinking about mothers.  Not any mother in particular just the general concept of mothers and the way we often stereotype them.  Why are mothers always seen as sinners or saints?  Is there no possibility of them just being good enough?

I spent ages trying to find a card for my own mother but wasn’t really happy with all the “perfect mother” or “best mother in the world” messages.  I settled for a card with no message at all in the end and simply wrote my own words inside.  My mother isn’t perfect but she is good enough, and yet somehow I feel uncomfortable saying that.  So, why are mothers always seen as sinners or saints?

Many cultures and religions have stories around a virgin birth.  These perfect mothers are happy to become bit part actors in their child’s (usually their son’s) story and ultimately bear loss and grief with dignity.  Thus motherhood becomes defined as self-sacrificing, a mother’s place is clearly in the background, her only role to facilitate greatness in her children.

Journalist Amy Westervelt said that “motherhood is a still a sort of time machine, shooting women instantly back to 1950” and, whilst I don’t agree entirely, there is something about the idea of a “perfect mother” that makes me think of a twinset and pearls.  These images have been presented so often in film and literature that they are hard wired into our collective psyche.

I have also noticed that, when we attach any pre-fix to the word mother, the pre-fix acts as a pejorative.  Working mother, single mother, stay-at-home mother, all form a stereotype of their own and all imply some form of criticism – as if being anything other than just “mother” makes you less saintly.

My own field of psychology and therapy has not been of much help either.  So often, blame for any psychological disturbance is aimed at the mother.  Mothers have variously been blamed for causing schizophrenia, autism, narcissism and a host of more minor psychological disturbances.  Mothers are blamed for caring too much or too little, for being too strict or too lax and it’s probably best not to get me started on Freud and motherhood…

Today, new mothers are still faced with castigation if they don’t breastfeed (or indeed if they do, in public).  They are seen as bad mothers if they don’t cook baby food from scratch or they use disposable nappies.  Mothers feel that they are failing if their children don’t experience every possible extra-curricular activity.  Mothers are blamed if their children drink or take drugs or don’t do well enough at school.

There are books and blogs galore telling mothers how to get it all right.  It seems so simple that strangers feel able to criticise or offer unsolicited advice to mothers that they meet out in public.

In fairness, bloggers have also claimed the sinners end of the parenting spectrum – “telling it like it is” in a series of funny and irreverent stories that portray motherhood as an awful and impossible situation that can only be survived by excessive drinking.

But the reality is somewhere in the middle.  Most mothers do their best most of the time.  Sometimes their best is awesome, sometimes it is awful but mostly it is just good enough.  And good enough is good enough.

Of course, there are some highly damaged women out there raising damaged children.  I am not advocating or condoning neglect or abuse.  I simply want to tell you that, if you can’t be a saint it doesn’t automatically make you a sinner.

As always, I simply want you to know that you are enough.