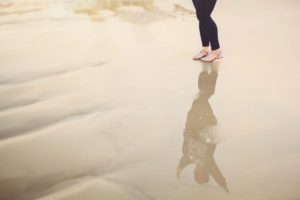 Earlier this week I was sitting on a beach, morning coffee in hand, reflecting on all things Yellow Dot.  My peace was soon disturbed by the arrival of a visiting family.  The children ran headlong down a slipway onto the beach and then stopped.  I see this often with families.  The focus has all been on getting to the beach but not on what to do once they arrive and so they rush to the sand and then – stop.  But this time, I was more interested in what happened next.  Each of the three children approached this Brave New World differently and I wonder if you recognise yourself in any of the responses.

The youngest of the boys was (at a guess) around five or six years old.  He rushed to take off his shoes and socks and ran around barefoot in the sand, laughing.  Then he sat down, letting handfuls of sand trickle through his fingers, examining every grain and tiny pebble with wonder.  He was totally immersed in the joy of the unfamiliar.

His older brother was around nine or ten years old.  His immediate response was to throw seaweed and sand at his siblings.  This was rapidly followed by finding the biggest rock he could carry and smashing it repeatedly on the slip way, shouting “yeah, I’ve broken it”, when it finally cracked.  I see this a lot in adult behaviour too.  The need to hurt someone or destroy something we do not understand.  The unfamiliar becomes something to conquer or diminish.

Their older sister gave me most pause for thought.  She was probably around twelve or thirteen.  She ran down the slipway and stopped at the bottom with her brothers and then – nothing.  She brushed off the sand and seaweed the older boy threw but did not complain.  She watched each of her brothers in turn but clearly felt unable to join in with either the exploring or the destruction.  She asked her mother if she should take off her shoes but she didn’t want to get sandy.  She looked repeatedly to her mother, as if hoping for some direction.  Eventually she headed back up the slipway to join her mother, observing the beach from the safety of the promenade.  I wondered when she became so timid, so self-conscious, so completely out of her depth in an unfamiliar environment.

I have worked with lots of people over the years helping them to adapt to a new environment or Brave New World of one sort or another.

I don’t often get to work with women who embrace the new with a sense of joyful adventure – these women don’t necessarily need my skills.  But they do number amongst my closest friends.

I have worked with new managers who have taken teams apart, changed routines and imposed new work regimes within a few weeks of starting.  They have determined to destroy the unknown and rebuild in their own familiar way, without taking the time to see how the existing systems work.  For them, the Brave New World has to be cowed and conquered.

I have also worked with many women who are timid in the face of change.  Who don’t know how to respond to the unfamiliar.  Women who lack confidence and continually seek approval and support from others.  Self-conscious women who avoid the need to change.

Which of these children do you most identify with?  How brave are you when faced with a Brave New World?  Would you like to approach the world with less anxiety and just a little more wonder?